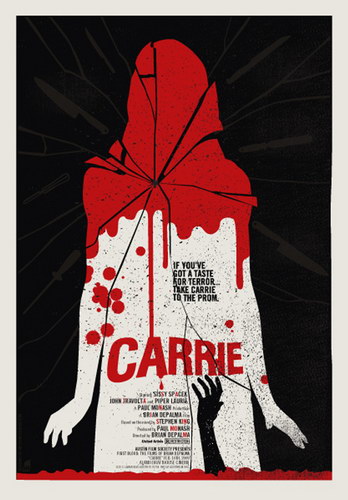 As it’s still Horror Movie Month (just, at time of writing), I thought this next What Dya Mean You Haven’t Seen…? should probably be horror related and one of the big horror movies missing from my viewing was Carrie. With news, trailers and images of the impending remake starting to land, I thought it was the perfect time to get acquainted with Brian De Palma’s original telling of the Stephen King novel.

Plot: Carrie White (Sissy Spacek) is an unassuming, high school loner who gets teased by her classmates and suffers physical and emotional abuse at the hands of her super-religious mother (Piper Laurie). Odds things start to happen during some of Carrie’s more irritable moments: a light bulb smashes, an ash try flips off a table and a boy falls off his bike after teasing her. However, when a prank at prom humiliates Carrie on front of the whole school, she unleashes a fury that has disastrous results.

Strip it down and Carrie is a coming of age story but with a horror twist. The film starts out with Carrie getting her first period whilst in the shower at school, an obvious statement that she is becoming a woman. This is mirrored with the onset of her telekinetic powers, symbolising the fear and confusion many experiences when going through that stage in their life. It’s also an excellent example of foreshadowing, a scaled down version of what will happen at the prom later in the film.  However, she grows as the film progresses, standing up to her mother and getting her revenge on those who tormented her. This her sexual awakening, and the sexual imagery throughout only cements this; often an act of torment or violence is closely associated with something erotic or sexual. The opening sequence with Carrie in the shower is a prime example of this.

Some of the above may sound a little too teen drama and, to be honest, the film does descend into that at times. Telekinesis and mental mother aside, a good portion of the film wouldn’t look out of place in a high school drama, which can detract from the overall atmosphere of the film. A classic example of this is when some of the boys are trying on tuxedos for the upcoming prom and the film speeds up Benny Hill style whilst they’re doing so. It seems completely out of place and is more confusing than anything. Another criticism of the plot is that Carrie seems a little too accepting of her powers. It’s unclear as to whether the instances we see of her using her powers are the first time it’s manifested itself or whether it’s happened before. If the former is the case, which I believe it is, Carrie doesn’t seem that freaked out by it; she just does a bit of research in the library and then has full control over her powers. It might have been nice to see her struggle to come to terms with them or use them, but that may well have added too much onto the runtime of the film. 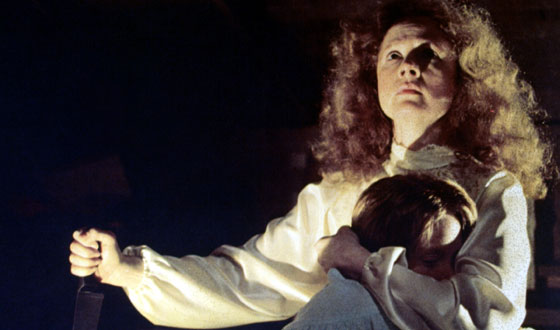 Aside from the scenes with Carrie’s mother there is very little in the first two thirds of the film to offer in the way of scares, and it could leave some wondering whether it’s ever really going to get going. However, the first and middle third are very much a prelude to what’s to come in the final act and where things turn into a more conventional horror film. If the film’s pacing did feel ever so slightly slow up until this point, then from here on in, it certainly makes up for it. All the torment and abuse suffered by Carrie throughout the film is unleashed with a torrent of anger and malevolence that is shocking but will strike a chord with many. It’s the classic scene where the little kid punches his bully in the nose or the ugly girl who shocks everyone with how beautiful she really is; this is Carrie standing up to all those who have caused her so much misery and anguish.

Carrie’s actions aren’t without their consequences, however, as many innocent people are killed and this brings some mixed feelings. Obviously what Carrie does, especially to all those who have done nothing or little wrong is nothing short of abhorrent, but there’s also a sense of Carrie getting the revenge she deserves. This brings up some interesting moral questions as I found myself siding with Carrie, whilst also willing her to stop as it’s likely she wouldn’t want to hurt so many innocent people. Or maybe she would, who knows?

Carrie, with her often deadpan expression, looks incredibly creepy drenched in pigs’ blood and the full extent of her powers and that she is willing to use them is terrifying. As Carrie makes it home following her deadly revenge, the creepiness gets upped that bit further as both we and Carrie are unsure of her mother’s whereabouts. This uneasiness immediately following the craziness at the school offers a different brand of horror and one that is supremely effective when juxtaposed with what has preceded it. We then have that final scene that I had a feeling was coming but still made me jump pretty high. The last third of the film more than makes up for any lethargy or wandering in the narrative leading up to it, and leaves a lasting impression that many other films fail to do. 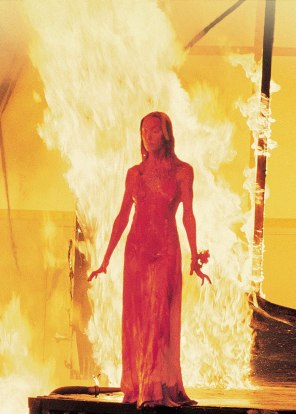 Much of the film’s success must be attributed to the performances of Spacek and Laurie. Both are superb and Laurie in particular is supremely creepy with her religious obsession. She always seems much more of a danger to Carrie than any of her tormentors at school, making it much scarier to think she has to go home to that after school every day. For much of the film, like Rosemary’s Baby, this is Carrie’s horror rather than something designed to scare the viewer directly. Also, for some reason, I found that Carrie’s accent plays a huge part of her character. That Southern drawl, combined with the way she refers to her mother as ‘mama’, gives her a more childlike quality that makes the abuse she endures at the hands of her mother all the more repulsive.

One thing that is a little jarring viewing this over 35 years since it was made is the special effects. Obviously that happens as films get older and technology advances, but the hovering fire hose at the prom and the flying knives in the fight with her mother do look dated and even a little comical. The cult UK horror comedy Garth Marenghi’s Darkplace (which you should definitely check out if you can) has parodied effects such as these and it does go to highlight how much they have aged. Despite that, it’s not enough to completely take away from the scenes, although it might raise a slight smirk.

To wrap up, I just want to say a few words about the upcoming remake. Having now viewed the original, I can see that there definitely is room for a new version, but it needs to strike the right balance between being its own film and staying true to the original. Apparently, it is going to be a retelling of the novel rather than a remake of the film, which probably works in its favour as it can sit alongside the original rather than try and be an updated version of it. Many are obviously going to make the comparison between the two, so I just hope it doesn’t resort to a succession of jump scares in place of character and relationship development. Chloë Grace Moretz is to play Carrie whilst Julianne Moore will play her mother. Even though I’m not a huge fan of Moore, I can totally see her in that part. Let’s just hope she nails the crazy. I’m a little undecided on Moretz at the moment. To me, I can’t imagine her going from fragile loner to vengeful psycho, which Spacek did so well. However the remake/reimagining/retelling, whatever you want to call it, turns out, hopefully it won’t mean that overlook the original because it’s a fantastically creepy tale that, although dated at times, still packs a punch when it gets into its stride.

19 thoughts on “What Dya Mean You Haven’t Seen… Carrie?”