Finally, I have seen a David Lynch film. This was one of the biggest gaps in my film knowledge (although there are countless others); I’ve seen so many comments along the lines of ‘this reminds me of David Lynch’ or ‘those scenes were very Lynchian’, and I had no idea what they were talking about. So I finally decided to check out his work and thought I’d start at the beginning with his 1977 work Eraserhead.

Jesus Christ. I was not prepared for this.

Plot: Harry Spencer (Jack Nance) is invited to dinner with his girlfriend, Mary X (Charlotte Stewart), and her family. However, when he gets there he’s informed that Mary has had a baby, although she’s not sure if what she’s given birth to is human. The pair move in together but Mary soon leaves when she can’s deal with the baby’s incessant crying, leaving Harry to deal with it all by himself.

And that’s about all I can say about the plot. Not because I don’t want to, but because I genuinely don’t know how to describe any more of it than that. It’s a virtually impossible film to explain; it’s hugely surrealist and good chunks, if not all, of it are up for interpretation. You may well find some Dali and Buñuel influences in there. Lynch has also clearly been influenced by German expressionist cinema; the chiaroscuro lighting, themes of madness, angular cinematography are all there in abundance. Even the ‘Man in the Planet’ character (Jack Fisk) feels like he’s been taken straight from an expressionist film.

Even though there is some semblance of a plot, some scenes are utterly crazy and are rather random, although no doubt have some deeper meaning. For instance, the film starts with the aforementioned Man in the Planet pulling some levers, causing a sperm like creature to come out of Harry’s mouth and land in a puddle. Later on we have Harry’s head falling off, replaced by his baby’s weird little alien head. Harry’s head then falls from the sky, is picked up by a child and taken to a man who turns his head into pencil erasers. Very, very odd.

This has been stuck in my head for days; I feel like it’s infected my brain! Creepy but mesmerising, which pretty much sums the film up.

Basically, if you’re not one who likes their films with a massive side of weird, then this is most definitely not for you.

But it’s not just weird; it’s really quite unsettling and disturbing, too. There are body-horror elements to it that will likely make you cringe and recoil, whilst pretty much the whole thing feels like one big nightmare from start to finish. It’s rarely clear whether anything is real or a dream and trying to piece the whole thing together can be really rather exhausting. It feels like a product of the subconscious, with imagery that a psychologist would have a field day with.

At times it’s very claustrophobic with tight, intimidating interiors that seem to close in on Harry as the film progresses, whilst the sound is also hugely unnerving. There’s a pretty much constant droning throughout, sometimes building to louder, almost unbearable screeching, which only adds to the atmosphere.

However, all that being said, there’s something intriguing about the film. Maybe it’s because of its reputation, but never once did I feel like not watching or turning the film off. I wanted to see what was in store for me next and just where this head trip would go. I’m still not sure whether I actually enjoyed it or not but it’s a film I’m glad I’ve seen, even if it acts as nothing more than an introduction to Lynch’s other work. 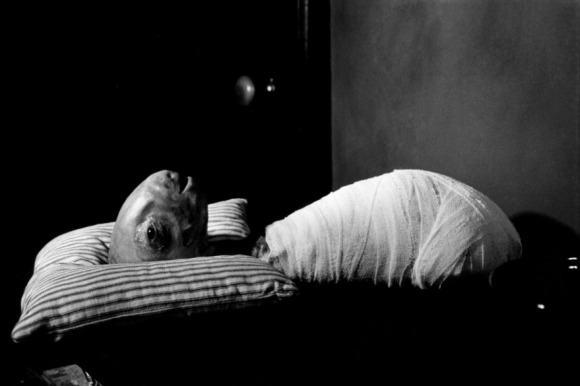 Whilst a full analysis of Eraserhead would probably take entire books’ worth of material, and could even prove to be impossible, I thought I’d at least offer a few thoughts on what I took some of the film to mean. Spoilers below…

The main theme that I felt ran through Eraserhead was a fear of commitment, more specifically of being married and becoming a parent. Harry turns up at his girlfriend’s house and is, out of blue, told that she’s had his child, something he’s completely unprepared for. At the beginning of the film, The Man in the Planet releases a sperm-like creature from Harry, perhaps suggesting that he wasn’t in control or was unaware when he impregnated his girlfriend. Perhaps he raped her?

Harry then stays for dinner at his girlfriend’s house, where her father has ‘made’ baby chickens and he asks Harry to carve them. As Harry is about to carve, the chickens start moving and as he plunges the knife in, blood pours out. This infanticide, also classic foreboding, could suggest that he is worried about being unable to care for the child and is worried about causing it harm. During these scenes, both Harry’s girlfriend and her mother have some sort of weird convulsion. Is he concerned about faulty genes being passed down to his child? 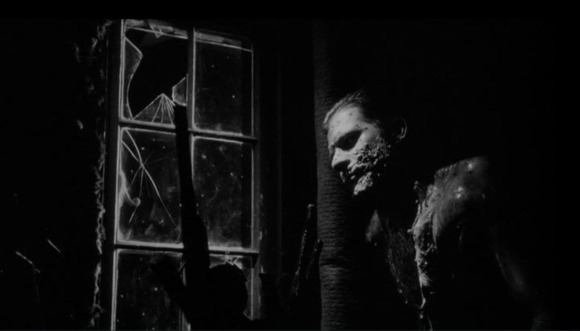 We then get to see the child, and as you can see above, it’s pretty horrific (there are stories about it being some kind of actual embalmed calf). Imagine giving birth to that! I saw this as Harry’s concern that any child he may have would be deformed in some way, and when his girlfriend walks out on them, this is surely a fear of being a single parent and, again, being unable to cope. I also see this mirrored by all of the dead plants in Harry’s apartment – he’s worried that he can’t make anything grow.

By this point, we have also been introduced the Beautiful Girl Across The Hall (Judith Roberts) with whom Harry later ends up having sex (in a cauldron, of course). To me, she represents the temptation of a third party whilst in a relationship. However, she is scared away by the baby; perhaps a fear of Harry’s that he won’t be able to attract another partner now he has a child.

Then we come on to The Lady in the Radiator. I see her as Harry’s angel, all in white, offering him a solution to all his problems. Before she sings her song, she appears on stage, stepping on lots of little sperm-like creatures. She’s Harry’s desire to be infertile so he doesn’t have any children. “In heaven, everything is fine”, the refrain she sings – a suggestion that Harry should kill himself and/or the child in order to be happy. Why the weird hamster cheeks? No idea.

The scene in which Harry’s head falls off to be replaced by one similar to that of his child’s is a very odd one and really takes the film into full-on surrealist territory. This could be Harry concerned that the baby will grow up to be like him: a case of inadequacy and self-loathing on Harry’s part. The following scenes of Harry’s head falling from the sky and then being turned into pencil eraser are completely beyond me. Again, no idea whatsoever.

Harry heeds the advice of The Lady in the Radiator and kills the baby, stabbing it in the same way he stabbed the baby chicken earlier in the film. The baby’s head then becomes bigger and bigger; Harry can’t get away from it. The levers being pulled by the Man in the Planet begin to spark and the planet cracks. This is Harry finally breaking down before killing himself and joining his Lady in the Radiator. Is she someone he has previously lost? His mother or wife? Possibly.

I’d love to hear your thoughts on the film. Did you enjoy it? What the hell is it about? Comment below and let me know what you think.

51 thoughts on “What Dya Mean You Haven’t Seen… Eraserhead?”