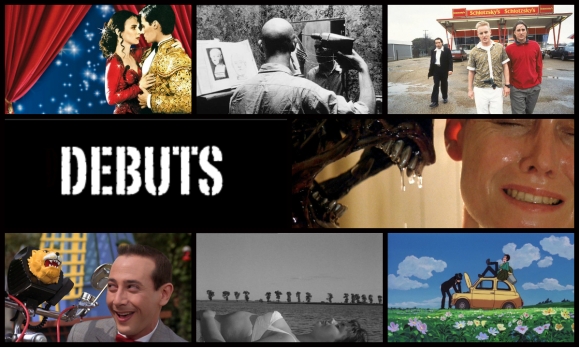 We’re nearing the end of the Debuts Blogathon, but both Mark and I still have a few pieces left for you and today’s comes from Dave over at ccpopculture with his look at Andrew Dominik’s Chopper. Dave’s blog is a reasonably new one to me but I’ve really enjoyed what I’ve read; definitely worth checking out. Take it away Dave…

Chopper, the directorial debut of New Zealand-born Australian director Andrew Dominik, is a study in contrasts and contradictions. Mark “Chopper” Read, the real Australian crim from whom the film takes its name, is a complex character, simultaneously fascinating and horrifying. The film’s script is penned by Dominik but based heavily on Read’s own best-selling memoirs, which were omnipresent in Australia bookstores throughout the ‘90s, and it refuses to celebrate or denigrate the man’s violent history. It opens with the disclaimer, “This film is a dramatization in which narrative liberties have been taken. It is not a biography,” but doesn’t use this as an excuse to fit Chopper’s crimes to a cookie-cutter narrative; rather it bends the facts to tell an ambiguous yet rewarding story.

Chopper seems to be largely unknown outside of Australia, though Dominik has made an international name for himself with his subsequent films, The Assassination of Jesse James by the Coward Robert Ford and last year’s Killing Them Softly. This obscurity isn’t necessarily surprising – at its time of release, Chopper himself was a minor Australian celebrity, using his notoriety in the press to launch an extensive and successful semi-autobiographical book series (nine books had been published by 2000). Most Aussie audiences went into the film expecting a comedic crime romp, thanks to the casting: at the time, Eric Bana was best known for portraying mullet-sporting bogan (a term for Aussie white trash, essentially) “Poida” on late-night comedy sketch shows. Bana was funny at times, certainly (Heath Franklin had a great deal of stand-up success as “Chopper,” essentially impersonating Bana’s take on Read), but he also delivered a nuanced, captivating performance that launched him to prominent Hollywood roles, including lead roles in Hulk (2003), Munich (2005) and Star Trek (2009).

The film is often funny, but it finds it humour in the oddest places. The first act takes place in H Division of Pentridge Prison in the ‘70s,and after Chopper brutally and graphically stabs a rival gang leader, he approaches the man as he perishes in a spreading pool of impossibly dark blood and asks, “You alright, Keith, eh? You want a cigarette, Keith?” Funny, but very dark. The scene is a potent introduction to Chopper’s complex contradictory character, establishing him as a violent, deeply troubled man who’s also peculiar in a childlike way. The pointlessness of the attack has been underlined in the preceding scene, with Chopper unable to come up with a reason for the ongoing feud between himself and Keith’s gang: “I don’t hate him. I don’t hate anybody.” 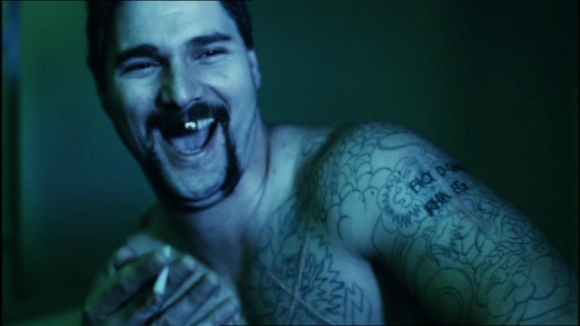 These early Pentridge scenes are Chopper’s best, shot with a cold blue filter that creates an unnerving, antiseptic atmosphere. As the sombre inmates scuttle around the pale prison, it’s reminiscent of insects crawling along a wall; an intentional evocation, with Dominik cutting to a cockroach and bull ant throughout these scenes. It’s demonstrative of Dominik’s impressive control of tone – he knows what images he wants to convey and executes them masterfully. There’s a wintery, washed-out feel to this entire act, particularly when Chopper’s former allies turn on him and attempt to murder him to save their own skins. Chopper survives the assault, but nonetheless there’s a funereal quality to the scene: colour drains out as it disintegrates into slow motion, smoke wafting and showers of sparks cascading with hypnotic sluggishness.

I said earlier that Chopper was about contrasts and contradictions, and that’s made very clear midway through the film, when it snaps roughly from the confines of Pentridge’s cold walls to the grimy Melbourne streets of the ‘80s. There’s a clear demarcation between “within prison” and “without,” Dominik abandoning the blue-rinsed solemnity for a gritty yet colourful palette, infused with fierce reds and lime-cordial greens and murky blacks. It recalls the look of Scorsese’s Mean Streets (not the only Scorsese vibe – a shot of Chopper contemplating violence within a blood-red nightclub feels like a conscious quotation of the classic slow zoom on DeNiro from Goodfellas). The contradictions at the heart of Chopper’s character are underlined in this section of the film; he’s the sort of man who shoots someone then drives him to hospital, or who lends a suit to the man who just tried to kill him. Chopper craves attention but is hopelessly paranoid, wanting everyone’s devotion but expecting everyone’s derision. These two competing impulses would be explicitly put at odds in Dominik’s next film, with Jesse James’s paranoia set against Robert Ford’s pathetic, whimpering need for notoriety.

The film commendably avoids celebrating Chopper – an unfortunate habit of Australian culture (see: Ned Kelly) – while also resisting the urge to portray him as an unambiguous villain. He may beat his girlfriend savagely for imagined affronts, but there’s also the sense that his perpetual paranoia is not entirely unjustified. The climax sees Chopper commit a murder that sends him back to prison, and the murder is presented in three different forms – once, as an apparently unprovoked cold-blooded killing, then from Read’s perspective as he shares the tale with the cops, and finally, a vaudevillian recreation that suggests that the murder may not have been unjustified. It’s this kind of ambiguity (and a refreshing lack of a clichéd character arc that sees Chopper grow and change as a person) that ensures the film is more than a mere biopic.

The aforementioned vaudevillian scene is one of many stylistic flourishes that Dominik peppers through the film, moments of experimentation amidst otherwise classical cinematography. These same elements are apparent in his later films; the theatrical recreation feels of a piece with the old-fashioned homage to silent film that forms the epilogue of Jesse James. A jittery, fast-motion conversation between a coked-up Chopper and a bartender provides a fleeting insight into Chopper’s headspace, and Dominik repeats this trick in Killing Them Softly, filming a conversation in an elliptical, trancelike fashion to convey the heroin-fuelled perception of the film’s protagonist. While Dominik’s excursions into experimentation may have occasionally overwhelmed Killing Them Softly, they’re perfectly executed within Chopper, improving the film rather than distracting from it.

I would argue that Chopper remains both Dominik’s best film and the best demonstration of Bana’s immense talent. Jesse James and Killing Them Softly may be more prestigious films (particularly the former, whose stately Roger Deakins-helmed cinematography is undeniably impressive), but they lack the lean hunger of Chopper. Emphasis on “lean” – one of Chopper’s strengths is how it tells a rich story in under two hours, while Dominik’s later films are somewhat bloated. Bana, meanwhile, has done excellent work in the years that followed, but has yet to have a film that really capitalises on his wounded masculinity as Chopper does (Munich comes close). It’s a debut that seems to be eclipsed by its main players’ more recent works, yet it deserves respect as an excellent film in its own right.

Over at Three Rows Back today, you can check out a brilliant piece on Quentin Tarantino’s Reservoir Dogs by housewives’ favourite Tyson Carter from Head in a Vice. Head over there right now to check it out!

Tomorrow is the penultimate post in the blogathon and comes courtesy of Shah from Blank Page Beatdown with his piece on Danny Boyle’s Shallow Grave. Don’t miss it!

Meanwhile, you can check out the rest of the entries in the Debuts Blogathon here.