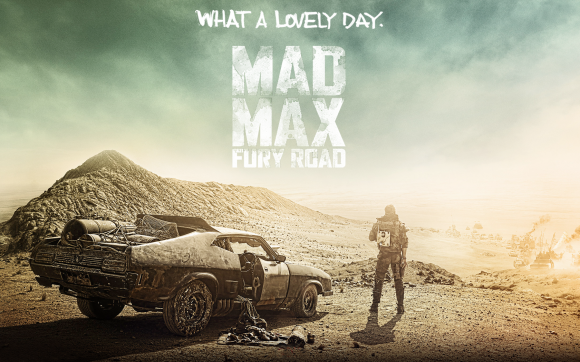 In a stark desert landscape where humanity is broken, two rebels just might be able to restore order: Max, a man of action and of few words, and Furiosa, a woman of action who is looking to make it back to her childhood homeland.

During grotesque warlord Immortan Joe’s chase of Max, Furiosa et al, one of the many, many vehicles is fronted by a blind bloke in a red jumpsuit playing a double-necked guitar that spews fire. For no apparent reason. And that pretty much sums up the absurdity of Mad Max: Fury Road.

They say never go back, but that’s exactly what director George Miller has done and there’s absolutely no signs whatsoever of him mellowing with age. Incredibly light on dialogue and exposition, Fury Road opts for retina-burning action instead, rarely giving you chance to catch your breath before the heavy metal soundtrack erupts and away we go again.

You feel sweaty and grimy, covered in dirt, sand and oil just watching it, and it feels great.

Its several action set pieces are visceral, brutal and simply spectacular, stunningly choreographed into a dance of death across the dystopian wastelands. Whilst undeniably impressive, the non-stop action does become a bit one-note and the film would benefit greatly from just taking the odd breather and fleshing out its characters a little more. Max himself feels woefully underdeveloped, and just giving us that little extra glimpse into who he is would have been welcome.

One of the main reasons the films works as well as it does is the aesthetic created by Miller and his cinematographer John Seale. Many post-apocalyptic films tend to have a rather washed out colour pallette but Fury Road is drenched in colour which just adds to the ludicrousness of the whole thing. And then there’s the vehicles and the noise and the make-up and bonkers editing – you feel sweaty and grimy, covered in dirt, sand and oil just watching it, and it feels great.

Whilst claims that Fury Road is some kind of visionary feminist masterpiece are somewhat wide of the mark, the film does do plenty to puts its men and women on much more equal footing than most other films of similar ilk.

For most of the film, this is Furiosa’s story, not Max’s – whether you want that is up to you.

You don’t need to look much further than Charlize Theron’s apocalyptic Ellen Ripley, Imperator Furiosa (Furiosa Road?), and her relationship with Max for proof of this. Furiosa enjoys just as much screen time as Max and we learn much more about her than Max’s Silverback grunts and gesturing ever give away. For most of the film, this is her story, not his – whether you want that is up to you.

At times Max does feel a little sidelined and this does bring about some issues, not because he has the right to be front and centre at all times, but because here we have a main character that, often, you struggle to really become invested in. Those who have seen the original Mad Max films may fare better here, but for those new to the series, there’s a good chance you won’t actually care that much about Max.

Whilst Fury Road is hardly the modern day classic some are labelling it as, it’s hard to beat when it comes to adrenaline-fuelled, fire guitar-wielding action. Its sheer vision and extravagance are to be applauded, and whilst a little more plot/character development wouldn’t have gone amiss, it’s a tremendous way to hopefully kickstart a new era in the Mad Max franchise.