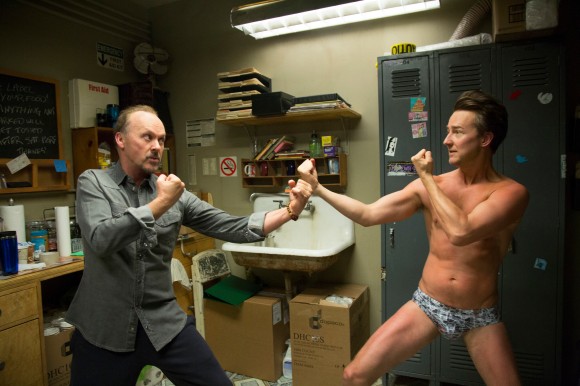 Riggan Thomson (Michael Keaton) is a washed-up actor who once played an iconic superhero. He must overcome his ego and family trouble as he mounts a Broadway play in a bid to reclaim his past glory.

How do you review a film like Birdman? It’s virtually impossible to truly describe it and do it justice using only words on a page or a screen. I did consider writing this review in one continuous sentence or paragraph as a nod to the film’s camera work, but decided it would just make reading my stuff even more painful than usual!

So where do we start? Let’s go for Birdman himself, Michael Keaton. Getting Keaton to play the role in the first place is a stroke of genius considering his role as Batman in Tim Burton’s Batman and Batman Returns. Like Riggan, Keaton has never been as popular since playing a superhero and you could argue that Birdman is Keaton’s version of the play Riggan is attempting to direct.

Keaton is fantastic as Riggan, constantly walking the lines between creative genius, enthusiastic try-hard and mental breakdown, all three personalities vying for centre stage. Due to the semi-autobiographical nature of the film, it does feel as if we’re seeing a window into Keaton’s own mindset and, as such, it feels like a very personal performance. A scene in which Riggan lays into a Broadway critic feels very much like he’s finally spewing forth an opinion he, and countless other actors, have been waiting a lifetime to express.

Emma Stone as Riggan’s daughter and Edward Norton as an arrogant Broadway star also put in excellent performances, both of whom also seem less than mentally stable themselves. 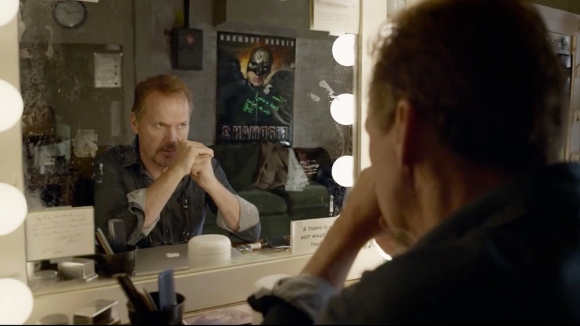 Birdman’s cinematography is in the hands of Emmanuel Lubezki, who did such sterling work on Gravity, and here, along with Alejandro González Iñárritu’s direction, he’s created something quite breathtaking. Birdman is shot as if it’s one, continuous sweeping camera shot, swooping gracefully from one scene to the next and occasionally using timelapse to advance the narrative, all set in and around Broadway’s St. James Theatre.

Like Hitchcock’s Rope, edits are hidden very cleverly, although on first viewing the whole thing may be a little distracting as you could be forgiven for focusing more on the camera technique than anything else. It is, however, nothing short of a technical and creative marvel and should be applauded for helping to make Birdman something rather unique.

There’s a fair bit going on under Birdman’s hood, which is why a written review barely scratches the surface. It’s about fame, popularity, social media, mental health, the film industry and a million other things. It’s one of those films in which you get out what you put into it; there are metaphors and subtexts at every turn and you’re never really sure whether what you’re seeing is literal or metaphorical. For example, does Riggan really have the telekinetic powers he exhibits when no-one else is around or are they figments of his imagination? It’s a film that lets you make those kind of decisions for yourself.

You could even go as far to say that there’s actually a little too much going on. With the aforementioned camera work, the erratic drum soundtrack and myriad of ideas and themes criss-crossing here, there and everywhere, it can be a little difficult to take it all in, at least on first viewing. It’s all good stuff that’s being thrown at you but with so much of it, only some of it can actually grab your attention at any one time.

Birdman is one of those films that almost demands a second viewing (and perhaps a third and a fourth) but it’s such a whirlwind of an experience there’s every chance you’ll watch a different film each time. It’s difficult to say Birdman will appeal to everyone as it most likely won’t, but if you want a film that’s innovative, thought-provoking and unique then it’s an absolute must-watch.

An author recounts the tale of Monsieur Gustave H. (Ralph Fiennes), devoted concierge of The Grand Budapest Hotel and his lobby boy Zero Moustafa (Toni Revolori). When Gustave is left a priceless painting by the deceased Madame D (Tilda Swinton), he and Zero must go to extraordinary lengths to keep it out of the clutches of her son Dmitri (Adrien Brody).

Many directors can be considered auteurs, but few boast such a distinctive style as Wes Anderson. Even the most casual cinephile can pick out one of his films from 100 paces, and we’ve even got to the stage where films are described as ‘Wes Anderson-esque’. With that in mind, it wouldn’t be exaggerating to say that The Grand Budapest Hotel is Wes Anderson’s most Wes Anderson-esque film to date.

The Grand Budapest Hotel is a matryoshka of a film, a story wrapped within a story, wrapped within another story, and this is just the start of its curiosities. We begin with a girl looking at a statue of an author and holding a copy of a book entitled ‘The Grand Budapest Hotel’. We then briefly see the author (played by Tom Wilkinson) before cutting to a younger version of him (played this time by Jude Law) who is speaking to a man about how he came to own our titular hotel. Clear? Good.

And it’s at that juncture that Wes Anderson is unleashed, as if the author of the book has employed the director to tell his tale. From that point on it’s a full frontal assault on the senses that rarely lets up for a moment. Anderson’s signature style has never been more pronounced; the colour palette is deliciously vintage and every shot is meticulously framed within an inch of its life.

The abundance of static camera shots gives the impression we’re at times watching a play, whilst some of the stylised scenery harks right back to the birth of cinema with Georges Melies’ A Trip to the Moon. There’s also a nice bit of fun had with the screen ratios representing the different eras in which the film is set.

But it’s not all style; there’s plenty of substance to back it up. The script is razor sharp, dripping with dry humour and delivered brilliantly by the unbelievable cast (which includes among others Bill Murray, Adrien Brody, Jeff Goldblum, Owen Wilson, Saoirse Ronan, Edward Norton, Harvey Keitel and Willem Dafoe). Ralph Fiennes as M. Gustave, the frantically camp hotel concierge, is wonderful as he rattles off his lines in quick-fire fashion and displays a genuine affection for lobby boy Zero.

As you’ve probably gathered, The Grand Budapest Hotel is somewhat on the bonkers side, perhaps too much so at times. With so much going on so quickly and with so many characters popping up here, there and everywhere, it can be a little tricky to follow what’s going on, although it’s so much fun that this shouldn’t present too much of a problem.

The Grand Budapest Hotel is a madcap caper of the highest order, a picturebook playground examining what’s so wonderful about cinema and presenting it in a truly wonderful explosion of action and colour.