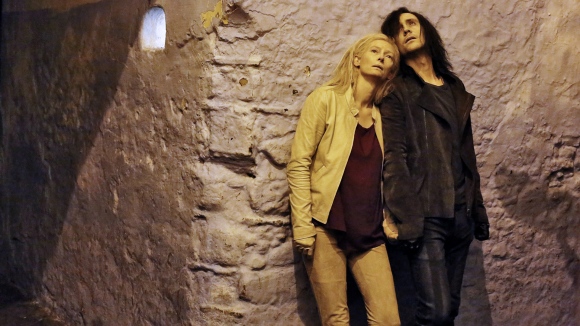 Adam (Tom Hiddleston) and Eve (Tilda Swinton) are two vampires who cope very differently with modern life. Eve embraces it whilst Adam rejects it and shuts himself off from the world. However, when Eve’s wild-child little sister Ava (Mia Wasikowska) turns up, both their worlds are thrown into disarray.

Fans of director Jim Jarmusch will have an inkling of what to expect from Only Lovers Left Alive. It’ll be highly stylised, told at walking pace and you’ll have to dig deep to find much semblance of plot. Sounds pretty perfect for the world of vampires, doesn’t it?

Both Adam and Eve have been around for hundreds, if not thousands of years and we get two very different perspectives on what is essentially eternal life and how they cope with it. Both have learnt to resist the urge to quench their thirst for blood direct from humans, instead sourcing it from specialist dealers; just part of the ubiquitous drug analogy that runs throughout the film.

Eve seems much more comfortable evolving over time; she has an iPhone, is happy to travel and is more outgoing compared to Adam, who has a much more negative view of modern society. He’s reclusive, refers to regular humans as zombies and is so disillusioned with modern life that he even considers suicide.

The two don’t live together and seem worlds apart, yet there’s something that feels really genuine about their relationship. Tilda Swinton and Tom Hiddleston have excellent chemistry together, and they really make you believe they’re a couple who have spent hundreds of years in each other’s company.

And yet we never really know much about them. Their past is only ever hinted at, and whilst you could argue this adds to their mystique, it’s also quite frustrating that these intriguing characters ultimately appear rather underdeveloped.

Then there’s the issue of the film’s pacing, and it’s this which is likely to be the sticking point with many. Jim Jarmusch’s films are known for deliberately slow paced and this is very much the case here, focusing much more on the mood of the film rather than its narrative. Only when Eve’s younger sister Ava arrives does it break into a jog, and even though this does up the pace, it still feels a little too lethargic for its own good.

What Jarmusch does do, however, is create an absorbing atmosphere and world in which his characters inhabit. The oneiric cinematography of both Detroit and Tangier, the two locations in which the film is set, has a hypnotic quality mesmerising and really draws you into the film.

Only Lovers Left Alive is not going to appeal to everyone, particularly in its almost comatose pacing. However, it’s sultry, seductive and sexy, and thanks to some mesmerising cinematography and two magnetic central performances there’s plenty to admire if you just sit back and let the whole thing wash over you.

Every year, a bunch of unproduced scripts float around Hollywood on something known as the ‘Black List’. Little known films such as Argo and The Social Network started out on the Black List before being picked up, whilst others include Juno, The Road and Safe House. One of the more recent scripts plucked from the List is Stoker, the debut screenplay from Wentworth Miller – yep, that guy from Prison Break – which has attracted Oldboy directer Park-chan Wook to direct his first English language film.

India Stoker (Mia Wasikowska) is mourning the loss of her father when her uncle Charlie (Matthew Goode), of whom she was never before aware, comes to stay with her and her mother, Evelyn (Nicole Kidman). However, there’s something a little off about Charlie and his presence and motives become increasingly questionable as both India and Evelyn become more and more infatuated with him.

Stoker begins rather slowly and struggles to find any kind of decent pacing. Its opening third perhaps doesn’t establish the tension and curiosity it needs to and it’s difficult to know the kind of direction the film is taking, stuck in a limbo between style and substance. However, after the half hour mark it ramps everything up significantly and it becomes a much more absorbing and enthralling film. 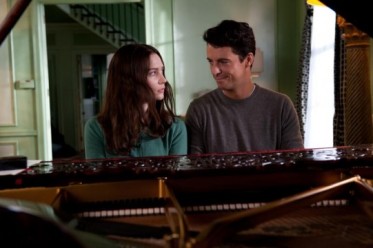 It also makes no bones about its central themes. This is a film about strangers, sexual awakening, loss of innocence, and family relations (Brian de Palma’s Carrie is clearly an influence). It doesn’t always spell these out explicitly but rather beats you around the head with imagery and metaphors to get its point across, which can feel a little over the top at times. It is, however, exquisitely shot with a number of memorable moments – a scene between Charlie and India at the piano is a highlight, although again a (very) thinly veiled metaphor.

Stoker is a pseudo-reimagining of Alfred Hitchcock’s Shadow of a Doubt and the entire film has a very Hitchcockian feel to it. There are some obvious parallels and similarities – uncle Charlie shares the same name is SoaD’s mysterious uncle – and there are some more subtle – stuffed birds recall Psycho, whilst the shot of India’s reflection in a pair of glasses is reminiscent of a famous shot in Strangers on a Train. Stoker even has its own (very different) shower scene. The film’s general foreboding tone also feels like a modern Hitchcock thriller with a few elements of Asian horror thrown in, refreshing a genre that has spent far too long away from cinemas.

The performances are universally rather awkward but they work for the film. Wasikowska is ideal as the film’s cold detached lead, whilst Kidman is suitably fractious. However, it’s Matthew Goode as Charlie who adds real bite to the film. Warm and friendly one minute and menacingly creepy the next, he provides a genuine sense of unease throughout.

There’s nothing in Stoker that we haven’t seen before and it may prove a somewhat divisive film, but the material is largely handled very well. It sometimes thinks a little too highly of itself and may occasionally step into self-indulgence territory, but as a dark, gothic thriller it’s atmospheric, unnerving and ultimately very effective.

Seeing Tom Hardy crack someone with brass knuckles is a thing of brutal beauty. Sure, we may be getting used to him doing that kind of thing by now (after all, we’ve seen him as the sadistic Bane in The Dark Knight Rises, cage fighting machine Tommy Conlon in Warrior and the crazy Charles Bronson in, erm, Bronson over the past few years), but when someone’s good at something, it’s often best to just let them get on with it.

In Lawless, Hardy plays Forrest Bondurant who along with his two brothers Howard (Jason Clarke) and Jack (Shia LeBeouf) are successful alcohol bootleggers, producing moonshine during the Prohibition era. Forrest is the bumbling hard man who is in charge of operations, whilst Howard likes to sample the moonshine a little too much. Jack is the runt of Bondurant litter and is in the constant shadow of his older brothers.

All is well in the bootlegging world until Special Detective Charlie Rakes (Guy Pearce) is employed with shutting them down and will go to extreme lengths to ensure he does so. However, Forrest and his brothers aren’t keen on going quietly. The film is based on a true story and adapted from Matt Bondurant’s novel The Wettest County in the World.

One of the most striking things about Lawless is how violent it is. There are throats slit, necks broken and skulls caved in, and there are times when it can feel a little unnecessary and over the top. Indeed, at times the violence threatens to define the film, especially considering the somewhat flimsy plot. 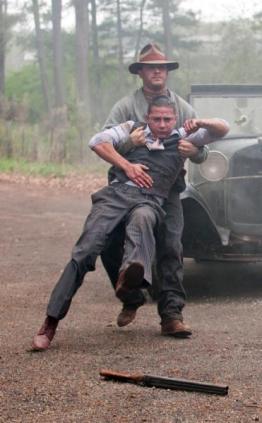 There’s enough to keep the story going but there’s little else going on aside from the usual good guys vs bad guys story arc. However, it’s interesting working out who the good and the bad guys actually are. The Bondurant brothers are the ones breaking the law, yet it’s they who we root for, not the authorities trying to uphold the law.

The actual issue of bootlegging is nothing more than a MacGuffin; the real focus of the film is the relationship between the brothers and their struggle to adapt to changes in the law and technology. Due to this, it very much feels like it should be a character driven film, but with little exposition and character development (aside from perhaps Jack), it falls short on this front also.

There’s some confusion as to who the film wants to make its real protagonist. It’s narrated by Jack, but for large portions of the film the focus is firmly on Forest. It shifts between the two throughout, whilst Howard remains nothing more than a secondary character. And talking of secondary characters, there is criminal under use of the film’s leading ladies. Bertha Minnix (Mia Wasikowska) is the daughter of a local preacher and becomes Jack’s love interest in the film, whilst Forrest’s attentions are turned by city girl Maggie Beauford (Jessica Chastain). Again, Howard doesn’t get a look in.

Both of these characters feel a little like an after thought, as if the filmmakers realised they hadn’t actually included any women in the script and so wedged them in where they could, which is a shame because they do add another dimension to the film and the actresses’ performances are excellent. Gary Oldman is also reduced to little more than a cameo; again, his character, mobster Floyd Banner, could easily have had a little more screen time. In fact, there are so many interesting characters that Lawless could well have been a mini-series, offering more time with each, although Boardwalk Empire has pretty much got that period sewn up right now. 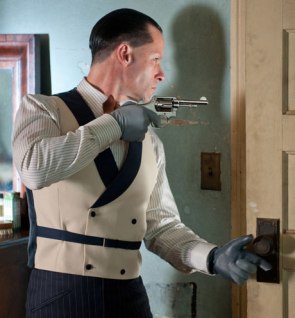 Although this review has been quite damning, there is a lot that Lawless gets right. It’s not just Wasikowska and Chastain who provide top notch performances; the acting is superb across the board. Hardy once again proves he’s much more than just muscle, and even Shia Lebeouf proves he’s got some talent there after all. With Lars Von Trier’s Nymphomaniac on the horizon, LeBeouf is clearly trying to move away from the Hollywood blockbusters that have earned him a somewhat tarnished reputation. Dane DeHaan also gives an entertaining performance as the brainy but rickets-riddled Cricket who help the brothers with their operation.

It’s arguably Guy Pearce’s Detective Rakes who’s the star of the show, however. His creepy, eyebrow-less visual is enhanced further by his equally creepy demeanour and willingness to go to any lengths to stop the three brothers. Pearce is superb as Rakes, giving the role the attitude and uneasiness it requires.

The film also looks absolutely fantastic. Director John Hillcoat has created a totally believable snapshot of the Prohibition era; the costumes, locales and cinematography all help create an incredibly rich mise-en-scène and a world you want to invest your time in. There’s also an excellent original soundtrack, but with Nick Cave behind the script (and some of the tracks), the music was always going to have elevated importance.

Whilst Lawless doesn’t quite reach the epic heights it clearly aspires for, it’s still an excellent watch with great performances and an interesting, if sometimes one-dimensional, narrative. It could, and perhaps should, have done a little more with the subject matter and the characters, but what it has done is immensely enjoyable and a worthy addition to all of the actors’ filmographies.