Tag Archives: The Kid With a Bike

Film Review: The Kid With a Bike

Cyril (Thomas Doret) is a 12 year old boy living in foster care in Seraing, Belgium. He is desperately searching for his father and his treasured bike, but is devastated when his father wants nothing to do with him. However, Cyril meets Samantha (Cécile de France), a local hairdresser, who not only finds his bike, but also agrees to foster him at weekends. This arrangement turns out to be an unstable one, especially when Cyril gets mixed up with a local drug dealer.

During the first ten minutes of The Kid With a Bike, it’s immediately evident that Cyril, at just 12 years old, is already a pretty damaged character. He lives in a care home, has no mother of which to speak and is clearly on a hiding to nothing looking for his father. It’s not a nice situation to witness and is made all the more frustrating by the unfaltering faith Cyril puts in his disinterested dad. Right from the off we’re aware that Cyril’s life is a crossroads and he could take either direction. His bike is the only constant in his life, which is why he’s so protective over it.

This should provide all the ammunition needed to identify and sympathise with Cyril, but it just doesn’t quite happen (at least not for me). Some of the scenes with Cyril and his dad are truly gut-wrenching, but those just don’t seem to make up for how difficult a child Cyril is. He’s clearly had a difficult upbringing that’s been devoid of any kind of parental love, but it’s hard to sympathise with someone who is often purposely irritating, disobedient and, at times, violent. Samantha seems to have never ending patience with him. 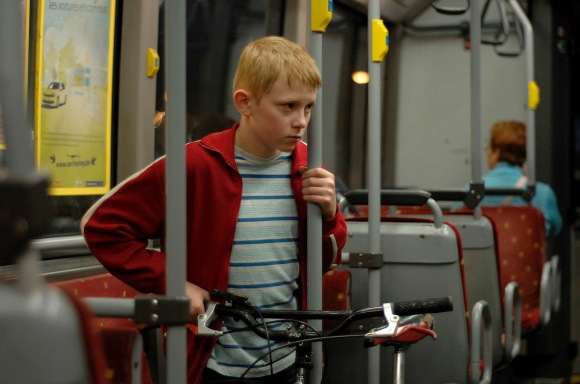 But that’s another slightly contentious issue – Samantha’s motivation for fostering and caring for Cyril are completely unknown. After a very brief meeting with Cyril in a doctors’ surgery, she goes out of her way to find his bike and agrees to foster him, yet we never know why. She’s even prepared to sacrifice her other relationships for the sake of Cyril, which whilst hugely admirable, just seems a little far fetched. It would be nice to learn a little more about Samantha and why she is so dedicated to helping a boy she barely knows. Some may like the ambiguity of her motivations and argue that one shouldn’t be so critical of someone else’s altruism, but it just doesn’t quite feel believable.

Jean-Pierre and Luc Dardenne provide excellent direction for the film, which gives it a slightly more arthouse feel. It could easily have been straightforwardly shot, but the use of long takes, the odd jump cut and the juxtaposition of drab and vibrant colours help to give it more of an identity.

It’s also worth mentioning the performances from the two leads, Thomas Doret and Cécile de France. Both give superb (and often very physical) performances, with de France in particular really standing out. Doret occasionally doesn’t exude enough emotion in the role, but for such a young actor, it’s a fine debut feature.

The Kid With a Bike is a very succinct little film. It’s not concerned with what came before and leaves us to make up our own mind about what comes after. It also has an ending that some may not get along with, appearing more allegorical than providing any actual narrative purpose, but it doesn’t harm the film at all. At times The Kid With a Bike is a very moving piece of cinema, but too often it feels a little shallow and keeps you just at arms’ length. A little more depth to the characters would have worked wonders.

In Cinemas this week – 23rd March

Without a doubt the biggest film out this week, or maybe even the year so far, The Hunger Games is set to be ‘the next Twilight’. But don’t let that put you off; if the trilogy continues in this fashion, it’s going to easily surpass its vampire peer and make people wonder why they were so stupid to buy a ‘Team Jacob’ t-shirt in the first place (although coming out the other side of puberty will likely do the same).

The Hunger Games is based on the novel by Suzanne Collins, and is set in a future version of North America (or America as it’s commonly known) where children are forced to fight to the death for entertainment. When her younger sister is chosen to take part in the games, 16 year old Katniss takes her place and must do what she can to survive.

Wild Bill has slipped under the radar a little but it’s been getting pretty favourable reviews so far. Bill (Charlie Creed-Miles) has just got out of prison and is determined to get back on the straight and narrow (aren’t they all?). However, he finds this more difficult than anticipated, especially when he finds that his two children have been abandoned by their mother and are fending for themselves.

Also pretty unknown, Act of Valor is the story of an elite group of Navy SEALS who are fighting to stop a planned terrorist attack on the US and recover a kidnapped CIA operative. The killer app in this though is that it features a cast of active-duty soldiers.

Also out this week

For those resisting the temptation of the above, there are a few other bits and pieces out, including Agent Vinod, The Kid With a Bike, and The Grind. The Kid With a Bike, in particular, looks to be an intriguing one, as a woman takes in a boy who was abandoned by his father when he was young. It’s unclear where exactly the bike comes into it though apart from that he seems to ride it a lot. And it’s in French, so if you don’t like to read your films, it’s probably best to steer clear.

Tagged Act of Valor, In cinemas this week, The Hunger Games, The Kid With a Bike, Wild Bill