7 of The Greatest Animated Female Characters in Film

This is a guest article from my very good friend Ruth Hartnoll who co-runs the awesome blog Crown Rules which you should definitely head over to and bask in its glory. Anyway here is Ruth’s post on her favourite animated female characters. Enjoy!

Kiki’s Delivery Service sees a young witch leave her parental home for her mandatory year of independent life. She travels to a distant town on a broomstick and sets up her own air courier service. She does all of this with her faithful sidekick, her cat Jiji.

This film was made in 1989 – the year I was born. In the same year Walt Disney bought out The Little Mermaid. That story sees a woman stripped of her independence and identity so that she can chase after a Prince. I think we both know who won 1989 – Hayao Miyazaki. Kiki’s Delivery Service is one of the few films where the adventure is had by a female character – for that alone she gets a firm place on my list.

The scene in the woods when she goes back to visit the female artist she happened to stumble across on one of her deliveries. The two characters talk about everything but men and they comfort each other with cocoa. What a bloody great scene that is.

There is no female character in animated cinema history that has made purple more fabulous and tyranny more appealing that Yzma from Emperor’s New Groove. She’s the villain, without falling into any of the female villain stereotypes (step mother, mother, jilted lover), and her assistant is a (loveable) muscled and stupid man.

Yzma kills it in this film. She sounds like she smokes 40 a day, could probably have her own headlining act in Vegas and she makes grey skin du jour. My love for Yzma is so paramount that when I take over the world I will have a National Yzma Day where all women can be tyrannical without reason, whilst wearing purple.

The potion making scene. The animation, the quips – flawless.

Wyldstyle is the fast quipping, punky and hilarious female from 2014’s The Lego Movie. She saves the hapless Emmett on countless occasions and is always ready with an inspiring speech, flick of the hair and wrench. Man, can that girl build a spaceship-submarine-time travel machine quickly.

Side Note: I was at a wedding recently and a 6 year old boy turned to me and said his favourite character in The Lego Movie was Wyldstyle. My feminist heart filled with joy and I proceeded to tell him about the importance of female role models in children’s films. He got bored and ate some cake, but I really felt I got through to him.

She saves Emmet and fights off a load of police whilst flying through the air, whilst constructing a getaway car, whilst finding time to flick her hair in slow mo. My kinda gal.

4. Satsuki and Mai – My Neighbour Totoro

I am going to cheat and put two female characters in here, but it’s only because you can’t have one without the other. Satsuki and Mai are the central characters to Miyazaki’s most loved work; My Neighbour Totoro.

Again, Miyazaki puts the two girls at the centre of the action and shows that girls can be heroines. As the girls’ mother is ill Satsuki takes on the role of guardian, not mother, to her sister and shows that being a guardian doesn’t necessarily mean being safe – it means looking after someone, even if that might involve a bit of danger and fun. Oh and they get to spend a lot of their time with a giant, fluffy imaginary beast. I don’t know what else a film could need really.

The now more than iconic bus stop and cat bus scene. It’s a bus that’s a cat people, need you ask why I love it so much? 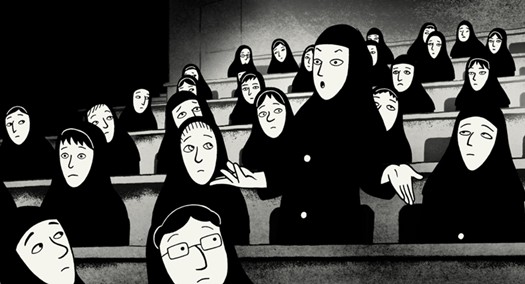 Persepolis is the startlingly beautiful and autobiographical film by Marjane Satrapi. It’s a coming of age story set in 1970s Iran and shows the impact of a country run by Islamic Extremists. Marjane is less than quiet about her opinions on the new regime and is eventually sent off to Europe to live alone, all whilst she’s a teenager.

This film shows a female character in real, mortal danger and shows her unnerving and resilient nature against oppressive figures. Marjane lives abroad, educates herself and messily falls in love and we get to see all of it in its black and white glory. Persepolis is so achingly beautiful that sometimes it’s hard to take it all in at once. Just go and watch it right now.

One of the best montages in all of film history exists in Persepolis. There’s a great part where Marjane lifts herself out of a depression and does it all to Eye of The Tiger. Genuinely funny and moving all at the same time.

The Toy Story trilogy is my favourite trilogy of all time (fuck off Star Wars) and that is largely down to Jesse. Jesse is the spunky and boisterous cow girl that eventually steals the heart of a space man and manages to rock a plaid shirt like no other woman before her.

Toy Story was, of course, a great exercise in film franchising because you could buy all of your favourite characters as they appeared in the film. Ka-ching. If any of my friends have kids then they are getting a Jesse doll and the whole box set so they can see what it looks like to play alongside the boys and be considered an equal. Jesse for president. 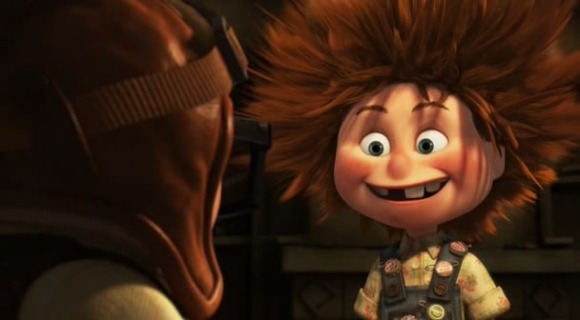 That fucking montage. Heartbreak aside, Young Ellie is so great. She’s loud, outgoing and steals the heart of a man with a balloon and a winning smile. Fair shout. Young Ellie also demonstrates that you can suffer great loss (cue the tears) and recover to live a life filled with happiness. She didn’t get to travel, which makes me sad, but that’s part of her story – she’s the whole reason Mr Frederickson finds his bravery. What a catalyst she is.

Adventure is out there! The scene in the bedroom after Little Mr Frederickson comes back from the hospital. They tell stories under their own handmade tent. Nostalgia abound.

Ruth Hartnoll is a full time copywriter, part time queen at www.crownrules.uk and obsessive theatre & poetry enthusiast. She adores animated characters, particularly female, and encourages all women and girls to go and to have lots of naughty fun – if the boys are doing it, we can do it better. Adventure is out there! Follow Ruth on Twitter here.

Emmet (Chris Pratt) is just an average construction worker with no standout qualities. However, when he meets the mysterious Wyldstyle (Elizabeth Banks) and Vitruvius (Morgan Freeman), he learns of a plot by the evil Lord Business (Will Ferrell) to unleash a terrible weapon upon the Lego world and freeze them in place forever. He may be ordinary but Emmet could be the only one who can stop Lord Business.

There have been numerous straight-to-DVD Lego films, but by some unearthly miracle this is the first time the Danish foot-cripplers have made it to the big screen. And it was well worth the wait.

Anyone who has ever been a child will have come across Lego at some point, and The Lego Movie brilliantly taps into the toy’s nostalgia which ensure it does what every good kids need to do – appeal to adults as well.

Kids will go nuts for the bright colours and whizz-bangery of the action, whilst adults will beam from ear to ear as they reminisce about building castles, mazes, pirate ships or whatever else popped into their heads. Most of the types of Lego are present and correct, from the Wild West to Medieval sets, and will cause memories to come gleefully flooding back.

There are also plenty of pop culture references and nods to other, more adult-oriented films. For instance, much of the film’s story and characters owe a debt to, believe it or not, The Matrix.

A big barrel of the film’s fun comes from the sheer number of different characters that turn up in the film, even just for the odd line. There have been several Lego video games based on films, and there are characters present from most of them, including Harry Potter, Lord of the Rings and Batman, the latter of which is particularly brilliant. Voiced by Will Arnett, Batman plays a surprisingly big role and his riffing on the character and its lore is bound to raise a few smirks with Bat fans.

As you’d expect with a film like this, the attention to detail is just staggering. Literally everything is made out of Lego – water, smoke, explosions, the lot; it’s all made from different Lego bricks (not Legos; never, ever Legos) and studs, and it only goes to enhance the film’s appeal. It’s part stop-motion and part CGI and simply a joy to look at throughout.

In terms of story, there’s not a massive amount here that hasn’t been done before. You’ll recognise story elements from numerous action and adventure films (and The Matrix, as mentioned earlier) but that actually adds to some of its charm, and the way it’s presented really sets it apart.

There’s an interesting final act that melds the Lego and the real world that is ridiculously clever, even if it does end up turning into into somewhat of an advert for Lego. It also gets a little schmaltzy and saccharine at times, hammering home the ‘you can do anything with your imagination’ mantra, although it never becomes too problematic.

There’s really not much to dislike about The Lego Movie. It’s got a sharp script, charming visuals and will have children and adults alike grinning like fools long after they leave the cinema.

Everything is indeed awesome.