An author recounts the tale of Monsieur Gustave H. (Ralph Fiennes), devoted concierge of The Grand Budapest Hotel and his lobby boy Zero Moustafa (Toni Revolori). When Gustave is left a priceless painting by the deceased Madame D (Tilda Swinton), he and Zero must go to extraordinary lengths to keep it out of the clutches of her son Dmitri (Adrien Brody).

Many directors can be considered auteurs, but few boast such a distinctive style as Wes Anderson. Even the most casual cinephile can pick out one of his films from 100 paces, and we’ve even got to the stage where films are described as ‘Wes Anderson-esque’. With that in mind, it wouldn’t be exaggerating to say that The Grand Budapest Hotel is Wes Anderson’s most Wes Anderson-esque film to date.

The Grand Budapest Hotel is a matryoshka of a film, a story wrapped within a story, wrapped within another story, and this is just the start of its curiosities. We begin with a girl looking at a statue of an author and holding a copy of a book entitled ‘The Grand Budapest Hotel’. We then briefly see the author (played by Tom Wilkinson) before cutting to a younger version of him (played this time by Jude Law) who is speaking to a man about how he came to own our titular hotel. Clear? Good.

And it’s at that juncture that Wes Anderson is unleashed, as if the author of the book has employed the director to tell his tale. From that point on it’s a full frontal assault on the senses that rarely lets up for a moment. Anderson’s signature style has never been more pronounced; the colour palette is deliciously vintage and every shot is meticulously framed within an inch of its life. 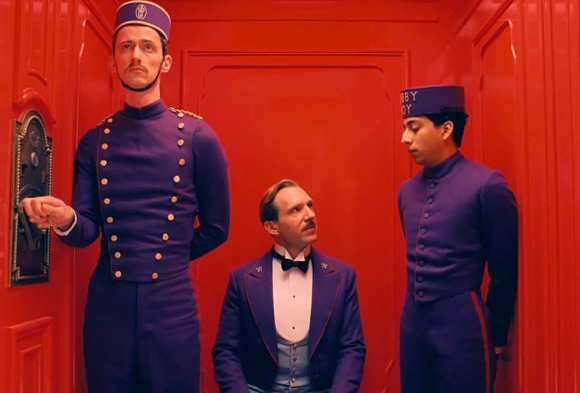 The abundance of static camera shots gives the impression we’re at times watching a play, whilst some of the stylised scenery harks right back to the birth of cinema with Georges Melies’ A Trip to the Moon. There’s also a nice bit of fun had with the screen ratios representing the different eras in which the film is set.

But it’s not all style; there’s plenty of substance to back it up. The script is razor sharp, dripping with dry humour and delivered brilliantly by the unbelievable cast (which includes among others Bill Murray, Adrien Brody, Jeff Goldblum, Owen Wilson, Saoirse Ronan, Edward Norton, Harvey Keitel and Willem Dafoe). Ralph Fiennes as M. Gustave, the frantically camp hotel concierge, is wonderful as he rattles off his lines in quick-fire fashion and displays a genuine affection for lobby boy Zero.

As you’ve probably gathered, The Grand Budapest Hotel is somewhat on the bonkers side, perhaps too much so at times. With so much going on so quickly and with so many characters popping up here, there and everywhere, it can be a little tricky to follow what’s going on, although it’s so much fun that this shouldn’t present too much of a problem.

The Grand Budapest Hotel is a madcap caper of the highest order, a picturebook playground examining what’s so wonderful about cinema and presenting it in a truly wonderful explosion of action and colour.