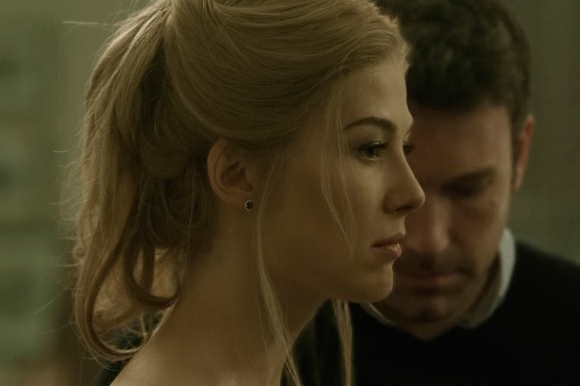 When Nick (Ben Affleck) comes home from work to find his wife Amy (Rosamund Pike) has disappeared, a large-scale manhunt ensues. However, as evidence comes to light and secrets are revealed, Nick ends up being squarely at the centre of the investigation.

David Fincher has amassed quite the body of work, but what’s impressive is that pretty much every one of his films is admired and revered. Even films such as The Curious Case of Benjamin Button has its fair share of fans, and so it’s no surprise that Gone Girl developed a fair amount of hype in the run up to its release.

Fortunately, for the most part, it delivers on its hype and will go down as yet another strong entry in Fincher’s filmography.

At first glance, Gone Girl is a simple whodunnit but it soon evolves into something much more (it’s difficult to go into any kind of detail without spoiling the whole thing). It becomes en examination of a marriage that seems perfectly normal on the outside but is actually anything but underneath.

A good chunk of the film is told from Amy’s point of view via a diary she kept and with each entry we learn a little more about her Nick’s relationship, all the time becoming that little bit more intriguing and eye-opening. However, as is always the case with a biased POV, it always leaves the question of just how much of this can we trust.

Fincher does an excellent job of creating two distinct sides to the story, and as we’ve come to expect from him, the film is at its best when it delves that little bit deeper into the darker side of the human psyche. He paints a disturbing portrayal of middle class suburbia, and suggests that even the most seemingly grounded of people harbour deep secrets whilst happy marriages conceal darkness and can go sour very quickly. What’s also interesting is that Fincher injects a surprising amount of dark humour into the film which adds an even more unsettling edge to everything.

The film is also an interesting examination of the media and how it can manipulate the truth and push a certain agenda based on empty assumptions. As far as TV stations and newspapers are concerned, Nick is guilty until proven innocent, something that rings very true with today’s media.

Ben Affleck is a decent male lead, giving Nick just enough of a nasty side to make you question his involvement, but it’s Rosamund Pike’s Amy that really shines. In the flashbacks recounting her diary entries we see her as the ideal loving wife, although Pike somehow lets us know there’s a little more to it than that and subsequently we’re never really sure if she can be trusted. It’s a fantastic performance that makes Amy the focal point of the film despite Affleck’s Nick receiving more screen time.

Not everything works quite so well, however, with the ending in particular feeling somewhat rushed and abrupt, leaving us abandoned in a story that feels only partly told.

Despite misgivings over the ending, Gone Girl delivers a healthy dose of intrigue and misdirection, ultimately culminating in a film that can’t help but grab your attention. It might not be in the upper echelons of Fincher’s work, but it doesn’t have to be in order to still be thoroughly entertaining.